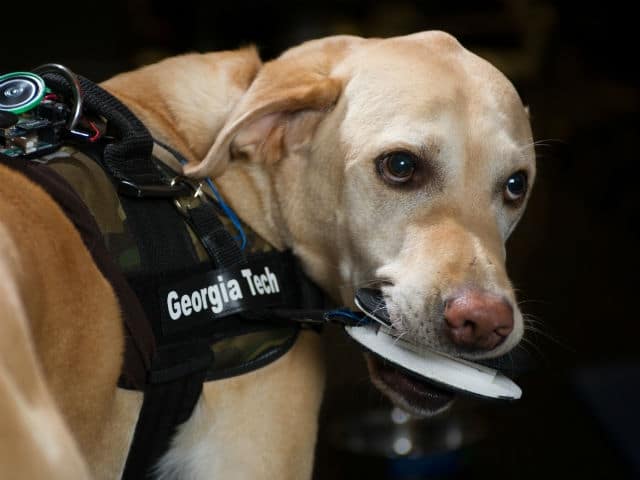 We have taught our dogs commands like sit, stay and heel, but what if dogs would be able to give us commands? That is exactly what one researcher is trying to accomplish.

Melody Moore Jackson, the creator and the head of Georgia Tech’s BrainLab, has developed computerized vests for dogs, so they “speak” to us — a breakthrough that can have major implications for service and working dogs.

Related: Veteran Gets Surprised at Giants Game With a Service Dog

Named the FIDO Project (Facilitating Interactions for Dogs with Occupations), the vest comes equipped with a lever that the dog can pull on, along with a sensor the canine can touch with its nose. When the dog uses either of these methods, the vest activates a controller unit that delivers an audio or text message such as “excuse me my owner needs your attention.”

Allowing a dog to communicate with humans can come in handy in a number of real-world circumstances. For instance, if a diabetic goes into shock and passes out, her service dog will be able to alert others of the emergency. Or if an epileptic has a seizure and needs assistance, the service dog could not only signal to passersby but could also potentially call 911 or contact family members with the vest. Besides assisting people with physical disabilities, dogs donning these tech vests could be used in the search-and-rescue field to text GPS coordinates of missing, among other tasks.

There is research underway to add more sensors and features to the vest.

In 2014, Jackson equipped eight dogs with a five-sensor vest. The shortest amount of time it took a dog to learn the functionality was 27 seconds, and the longest was 30 minutes.