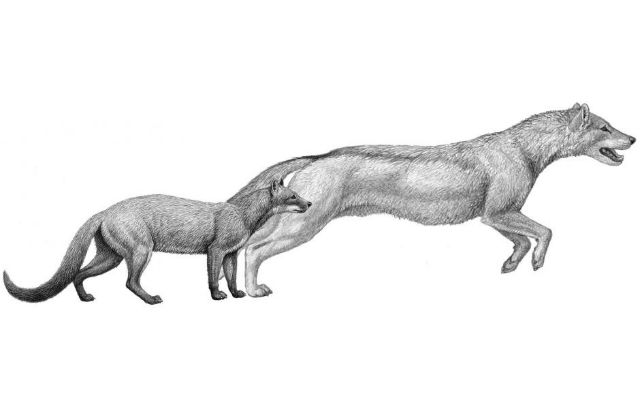 Climate change is a hot topic, but it isn’t new. And new research shows how altering habitats has had an impact on the evolution of dogs.

After examining fossils, scientists discovered that the first canines that emerged in North America approximately 40 million years ago resembled the more cat-like mongoose animal. This shape helped the canines hide more in the brush — when the continent was covered in thick forests — and pounce on their prey. But a few million years later, as the climate began to cool, the thick woods gave way to a more grassland habitat. And with that change, the dog needed to evolve to survive. Instead of needing to surprise its prey, they now needed to chase it down.

The scientists were able to see this evolution by examining the elbows and teeth of 32 different species of dogs that lived between 40 million and 2 million years ago. They discovered that the older canines had elbows that allowed their front paws to swivel and grab and wrestle prey, similar to a cats. But as time went on, the elbows evolved to be pointed more downwards, which helped with running.

The teeth of dogs also changed, moving towards chompers that had greater durability. The scientists speculate that the canines may have needed to eat prey that had been covered in dirt and grit in grassy plains, rather than the moist, leafy forest ground.

“It’s reinforcing the idea that predators may be as directly sensitive to climate and habitat as herbivores. Although this seems logical, it hadn’t been demonstrated before,” Christine Janis, professor of ecology and evolutionary biology at Brown University, who worked with a team led by Borja Figueirido, a professor at the Universidad de Málaga in Spain, said in a statement. She continues, “Now we’re looking into the future at anthropogenic changes.”

Related: Dogs Can Tell When People Are Mean to Their Owners, and They Don’t Like It