PRESS ESC TO CLOSE
News > Mayo Clinic Study Prescribes Sleeping With Your Dog, With a Catch 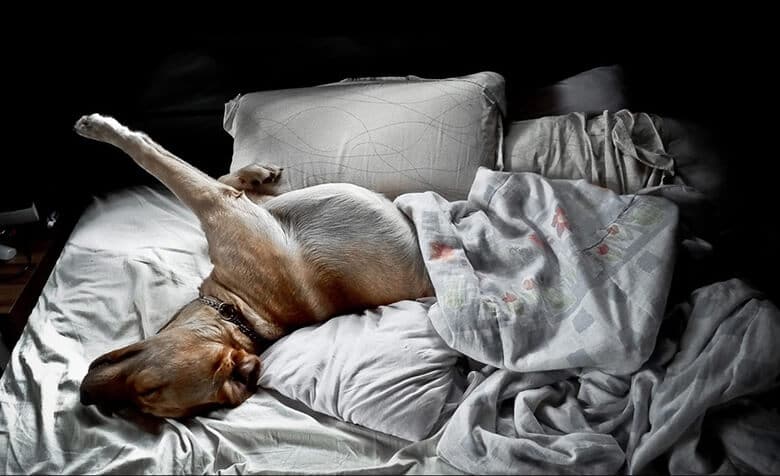 If you’re a fan of sleeping with your dog, you can rest easy. A new study by the Mayo Clinic concludes that a dog in your bedroom helps many humans sleep better.

Considering the fact that over 40 million Americans live with dogs, that’s a lot of sweet dreams. However, the study also found that sleeping with a dog on the bed, rather than just in the bedroom, has a negative impact on getting a good night’s rest.

The study, “The Effect of Dogs on Human Sleep in the Home Sleep Environment,” evaluated 40 people without any kind of sleep disorder. For seven nights, participants and their dogs wore an accelerometer, a device that measures the vibration or acceleration of motion — in this case, while sleeping. They were examining the sleep efficiency of both human and canine.

Scientist found that having one dog in the bedroom didn’t interfere with getting a good night’s sleep, contrary to what they originally believed. However, the findings were not the same if the dog was actually on the bed, which resulted in a lower quality of sleep.

Of course, us non-scientific dog lovers who can’t fall asleep without a furry companion within snuggling distance may disagree. According to a survey by the American Pet Products Association, 75 percent of pet owners keep their dogs inside for the night, and most of these lucky pooches crash out on their human’s bed.

There are arguments on both sides of the mattress for letting your dog on the bed. The size of your dog is also a factor. For dogs that don’t hog the bed, sleeping next to a dog is warm and cozy as a dog’s normal temperature is around six degrees warmer than ours.

Psychologist Stanley Coren, the author of many books about dogs, says a large number of people find sleeping with dogs psychologically comfortable. He points out that some anthropologists have suggested that sleeping with our dogs may be genetically hardwired into our DNA and that the practice of sleeping with dogs can be traced back to ancient history. Long ago, dogs not only kept their people warm in the days before central heating, but they also protected them from predators and other dangers.

The decision to allow your dog in your bedroom — or your bed — is personal. But if you need scientific proof that a dog in the bedroom is beneficial, a list of esteemed doctors has just provided that. As far as sleeping with your dog on the bed, use common sense. If you’re waking up in the morning feeling like you haven’t slept a wink, invest in a super comfy memory foam dog bed, put it in your bedroom, and train your pup to sleep on his own.

“The relationship between people and their pets has changed over time, which is likely why many people in fact do sleep with their pets in the bedroom,” Dr. Lois Krahn, a sleep medicine specialist at the Center for Sleep Medicine on Mayo Clinic’s Arizona campus and an author of the study, said in a statement. “Today, many pet owners are away from their pets for much of the day, so they want to maximize their time with them when they are home. Having them in the bedroom at night is an easy way to do that.”