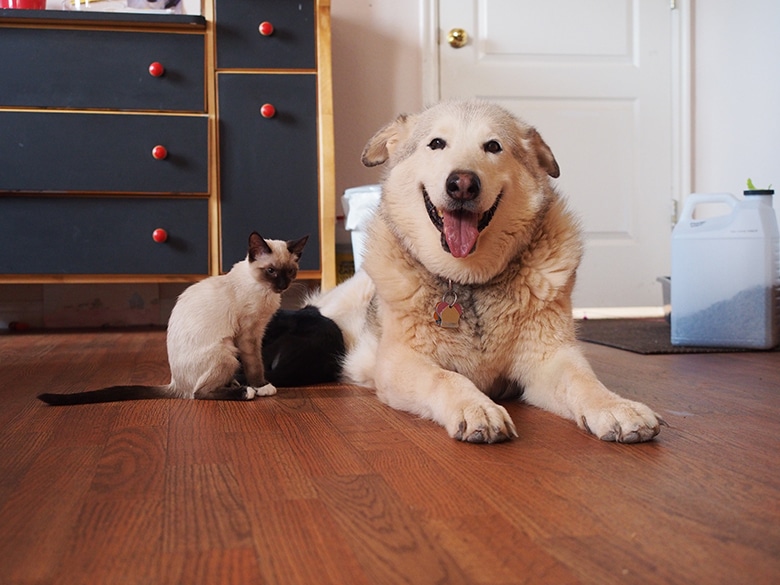 Flora and Dexter were in love. They spent all their time together, snuggling and napping. But when Dexter died, Flora was heartbroken.

What makes this love story unique is the fact that Flora is a 100-pound malamute and Dexter was a little 20-year-old cat when they met. Yes, you read that right. Dexter was an old, old man when Jill Williams and her family adopted him from Best Friends Animal Society, the same rescue that brought Flora into their lives. 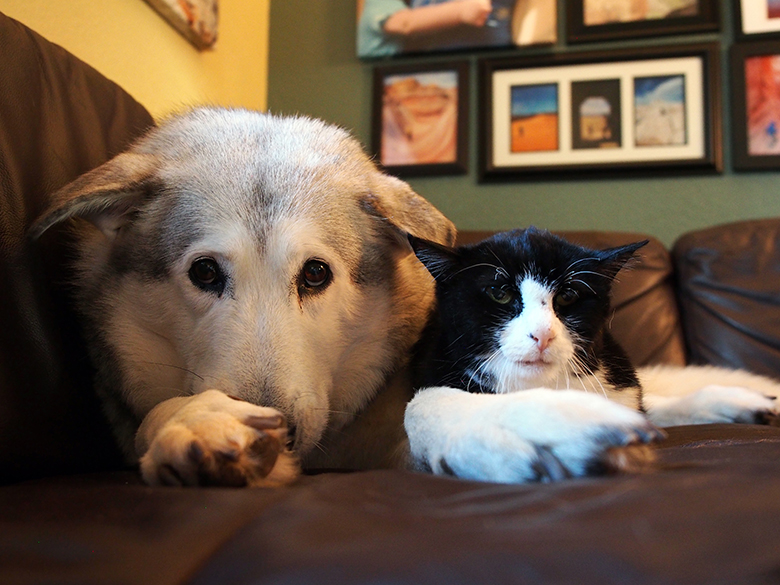 “Flora was adopted by our family in 2013 from Best Friends Animal Society after I saw her picture on a Facebook post,” Williams, who also works at the organization, tells This Dog’s Life. Though the Williams already had a house full of pets, and they weren’t looking to adopt, something about Flora’s face just grabbed her attention. “I could not stop smiling when I saw her.”

When Flora was brought out on a leash, she was extremely shy and nervous. “She was panting and looked visibly uncomfortable. And she was larger than life!” Flora was very overweight at 140 pounds, and her belly was dragging on the ground. “My heart just broke.”

The big dog was hesitant to approach Williams and her husband, but she immediately sauntered over to her two young children and sat down and gave them a kiss. Clearly Flora had been around children at one point in time that treated her kindly. “We decided right then to take her home for a couple of nights to see how she would fit in. She never left.”

Flora is a “sweet, smiley marshmallow of a dog.” All of the dogs and cats in the home look up to her as a matriarch. “She is larger than life, in both stature and good nature. Sometimes I think, ‘She can’t be a real dog! She’s just so special and soulful,’” says Williams. 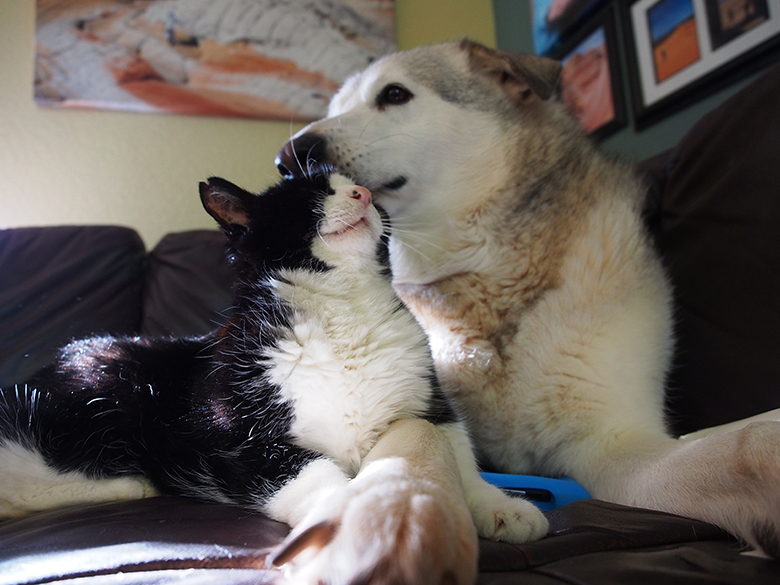 Dexter came into their lives in a similar fashion. Best Friends sent out an email to staff asking for foster families for kittens who had just come to the shelter. At the time, the Williams had three large dogs and a medium-sized mutt that were all rescues.

“We were pretty sure that if we took in a homeless cat, even temporarily, we’d need to keep them separated,” she says. “We had no clue how our dogs would receive a feline family member.” But they had a spare room, so they decided they could give a kitten a temporary home.

Later that day, Williams went to Best Friends to meet the kittens and choose one to bring home. But things didn’t go quite like she expected. “I saw Dexter.” 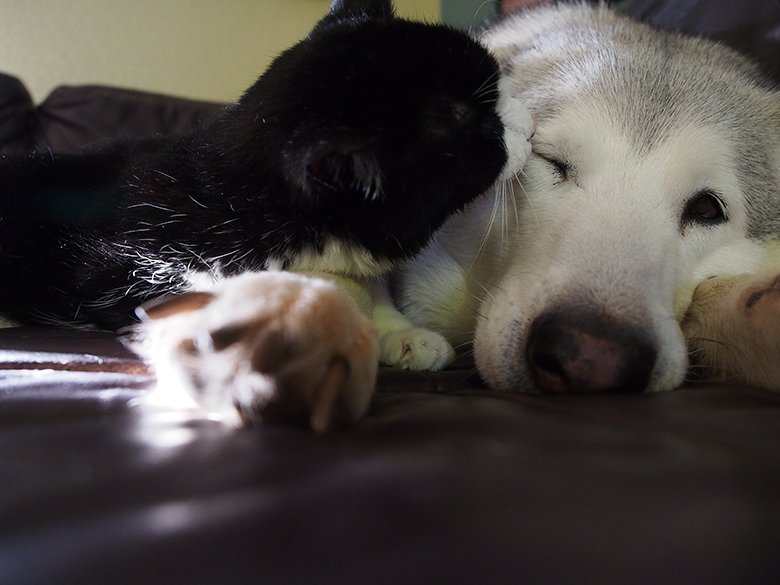 The cat looked very rough. His fur was very patchy all over, and he had no fur at all on his tail. He had a stern meow and was the only cat walking around the room. The caregiver said that Dexter was 20 years old. “He doesn’t like other cats at all, so we can only let him out from time to time.”

Williams’s first impression was “Wow, this cat really needs a home.” Then she thought about her four dogs and two kids, who would no doubt want to pick him up and play with him.

“How am I going to bring home a 20-year-old cat who looks like he already fulfilled his nine lives?” Williams thought. But Dexter was persuasive. He meowed and wove through her legs and put his paw on her lap when she knelt down. It was clearly meant to be.

A sweet, mellow, velcro cat, when Dexter met Flora for the first time, their bond was instantaneous. “It was like Dexter said, ‘Oh hey, you are super fluffy and really warm. Mind if I curl right up here with you?’” They spent all their day and nights together, napping and snuggling. 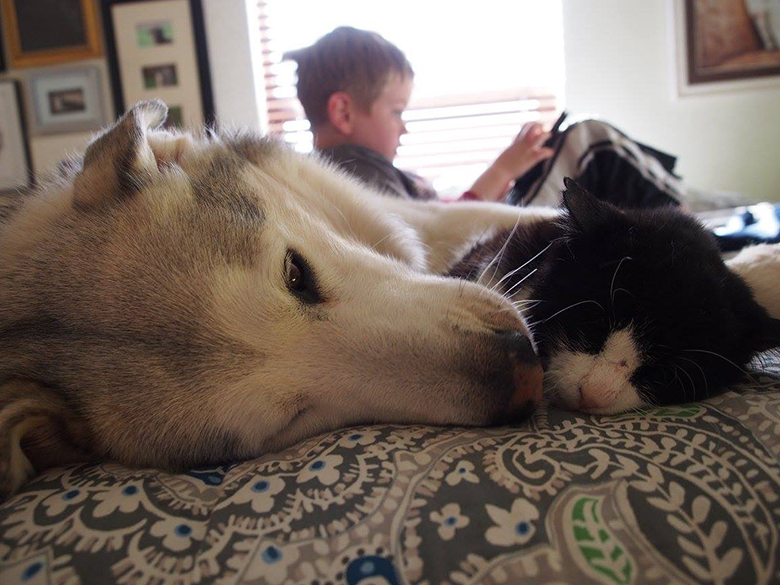 Dexter managed to make it to 22 years old before he died earlier this year. Flora was devastated. “She would stay outside and howl,” says Williams. “It made us very sad.”

The whole family was grieving. “We really loved Dexter,” Williams says. So, they decided to adopt two tuxedo kittens in need of homes from Best Friends. “We all thought this might help heal the hole in all of our hearts.”

Flora was really excited, and she tried to be on her very best behavior, says Williams, but the two kitties were just not interested. “They were so busy and hyper — not at all like Dexter!” Eventually, the two cats mellowed as they got older, and now they like to hang out with Flora, but the bond just isn’t the same.

Because they live in the same town as Best Friends in Kanab, Utah, the family often goes to visitor center to see the latest kitten arrivals. “Saturday mornings is ‘Kittens and Coffee,”’ says Williams. “The kids get a kitten fix, and mom gets caffeine,” she says. One Saturday, there was a poster on the wall advertising for foster homes.

What does a family with a houseful of animals do? They get more, of course. The Williams decided to foster kittens who would have a place to live until they were old enough to be spayed or neutered and then adopted. 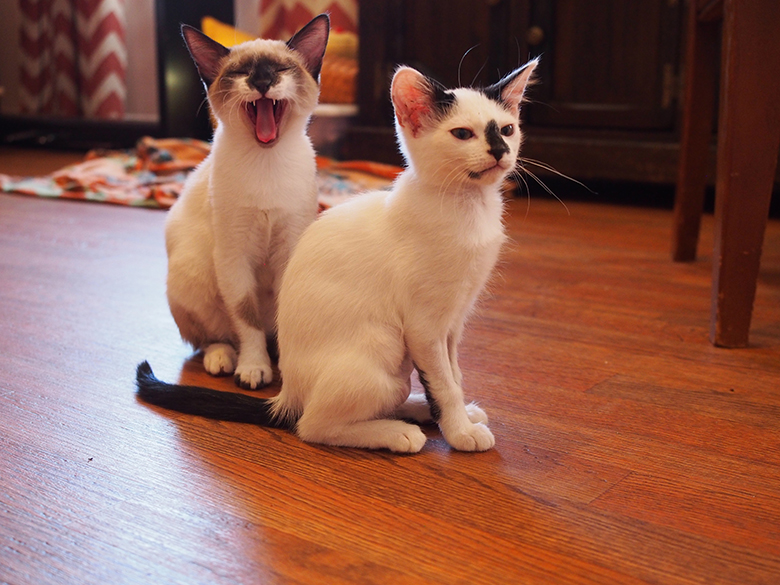 “This would free up room in the kitten nursery for more at-risk kitties, and it would also teach my boys a lot about responsibility, not just in the caring, feeding and socializing aspect, but why it’s important to spay/neuter to prevent a whole lot of kittens — in the most PG-rated version of things,” says Williams. 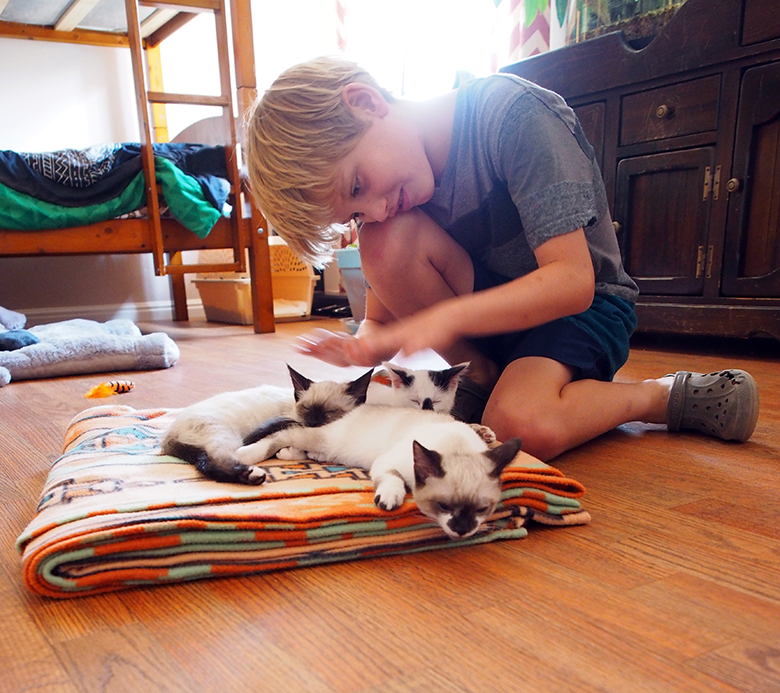 They brought home Iggy, Bowie, Roxie and Glamour the next day. At 10 weeks old, they were playful and curious. “We asked the foster coordinator if we should allow them to meet our cat-friendly pooch, knowing that exposure and acceptance to dogs can up the chance of a kitten getting adopted.” They were given the green light. It was time to introduce the kittens to Flora. 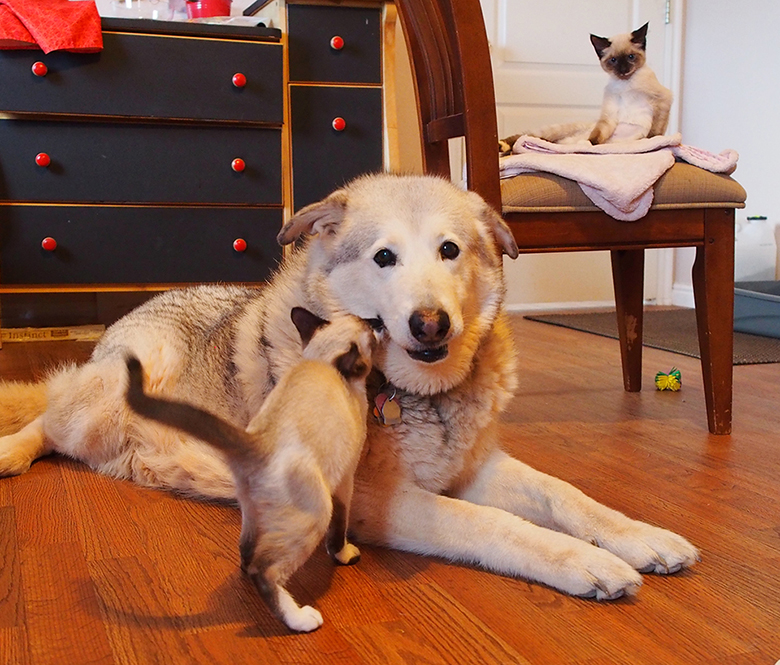 Flora sniffed every one of them, and then started to lick their tiny heads. Iggy, the male Snowshoe Siamese, was smitten. “Flora was happy,” says Williams. “She lay down and got very relaxed and smiley.”

Eventually, the kittens all got adopted. But Flora won’t be lonely for long. The Cat Whisperer can expect more kittens soon. “Fostering is so important to our mission of saving them all,” says Williams. Flora, the foster dog, agrees.