PRESS ESC TO CLOSE
News > K-9 for a Day: Cops Take Shelter Dogs on Ride Alongs to Help Them Get Adopted 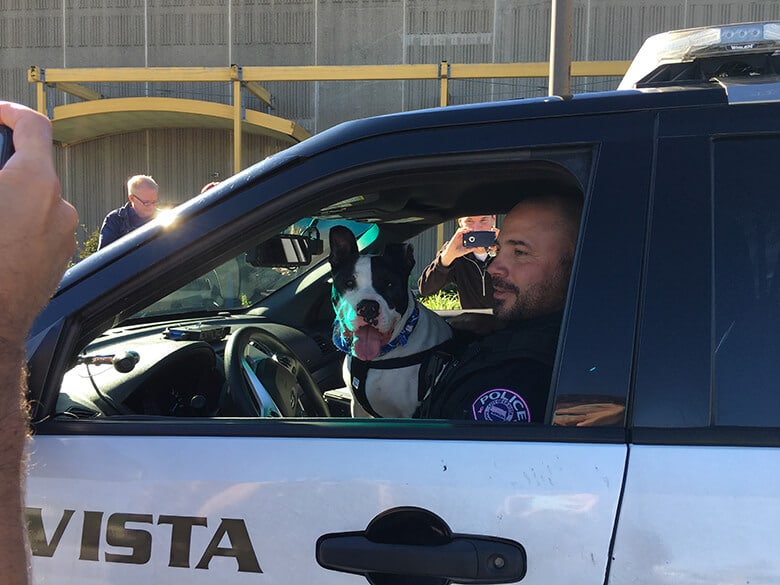 Shelter life is stressful. Dogs are afraid and often shut down emotionally, which makes it harder for them to attract the notice of potential adopters. Mickey was one of those dogs.

A 6-year-old “bully breed” with a perfect Mickey Mouse pattern on his back, he had been at the Nebraska Humane Society several times. His first stay was when he was a puppy. He was adopted by a family, but surrendered again five years later. “When he came back, he had been with his family for a long time and was very stressed at the shelter, so we worked with him behind the scenes,” Pam Wiese, spokesperson for the NHS, tells This Dog’s Life. 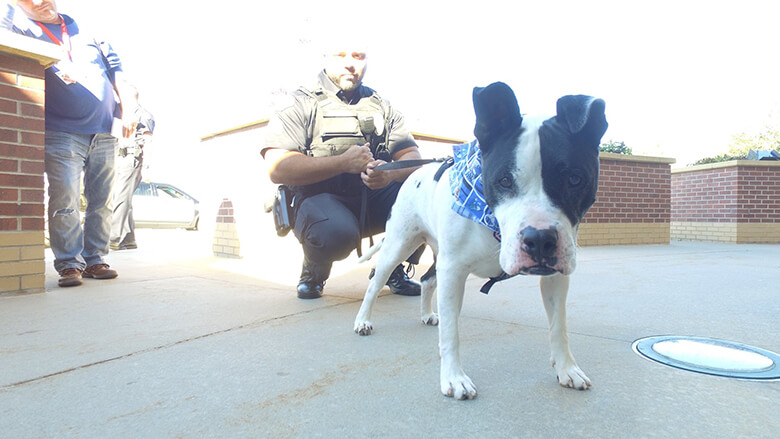 He was then adopted by another family, but that wasn’t the end of his story. Unfortunately, circumstances brought Mickey back to the shelter a year later. “This time he was older and a bit more mellow and able to stand the constant traffic of our adoption kennels. But he just wasn’t getting adopted.”

The shelter started taking Mickey to off-site locations when they had booths at different events. “He was great with people and kids, and he was fine with other dogs present, but he didn’t like being up close and personal with other dogs,” Wiese reports. And that was making it difficult for Mickey to finally find his forever home. “He received some interest, but everyone had other dogs and the meet/greets with those canines didn’t go well.”

They decided to try something else. The La Vista Police Department in Nebraska had recently launched a program called K-9 for a Day, after hearing about the initiative’s success in Green Bay, Wisc. It allowed shelter dogs to come along on ride alongs with police officers to gain exposure and hopefully find a forever home. 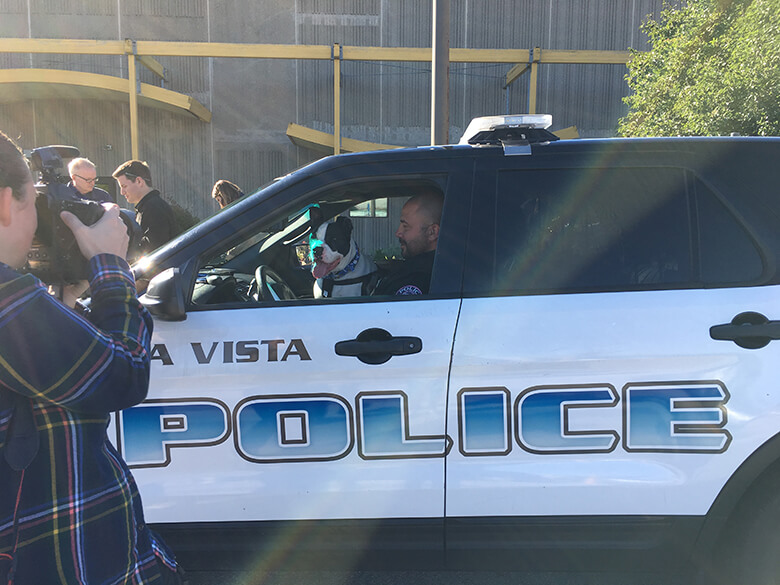 “The program offers an opportunity to not only strengthen our relationship with our partners at the Nebraska Human Society, but also allows our officers an opportunity to engage our community in a way that we may not have been able to without the addition of a great dog,” says Bryan Waugh, the Police Captain La Vista Police Department in Nebraska, who started the program.

The first dog who went out “on patrol” was Mickey. “He was the perfect choice for the K-9 program because he was mature, rode in the car well, greeted people beautifully, and we really wanted people to see his happy personality,” says Wiese.

Mickey’s big day began when an officer arrived to pick him up. He rode up front in the police car, and they stopped at the station to get Mickey a police patch for his collar. Then the pair headed out for a day of walks, visits to local stores and lots of admiration (and petting) from locals. And, of course, the bliss of sticking his nose out the window of a moving car. 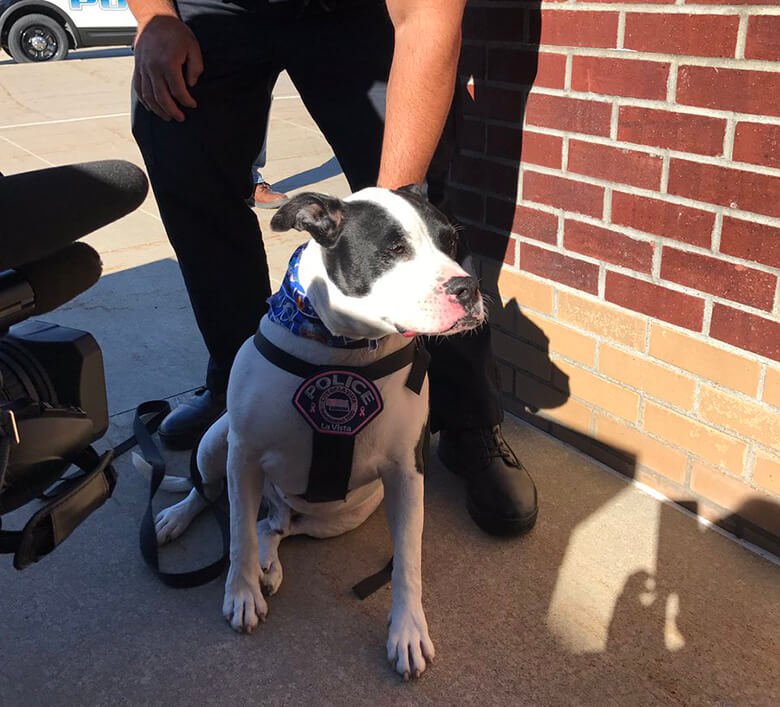 Image Credit: K-9 for a Day

“The officer loved that he had a dog with him when he went to do community engagement,” says Wiese. Mickey was an automatic conversation starter and made the officer more approachable as everyone wanted to meet the dog.

“This program allows the public to see these dogs out and about, being socialized and comfortable with others,” says Zwicky. “The program has proven to have a positive impact on the dogs, and it increases the chances they will be adopted into a loving, caring home.”

And that’s just what happened. Shannon Andresen saw his picture in the K-9 story coverage and fell in love. She came into the shelter with her boyfriend, and Mickey charmed the couple completely. They adopted him on the spot.

“We’ve gotten several updates from them and they LOVE him,” says Wiese. “He’s the only dog, so he’s king of the castle and he cuddles and is a wonderful gentleman.”

The program is run out of our Community Affairs Unit, but all of the officers support it and would love to have one of these great dogs as a partner for the day, says Zwicky. “It has generated some excitement and a lot of laughs around the station.” And what about the dogs? “If the dogs could talk, I’d say they are all saying, ‘me next!’” 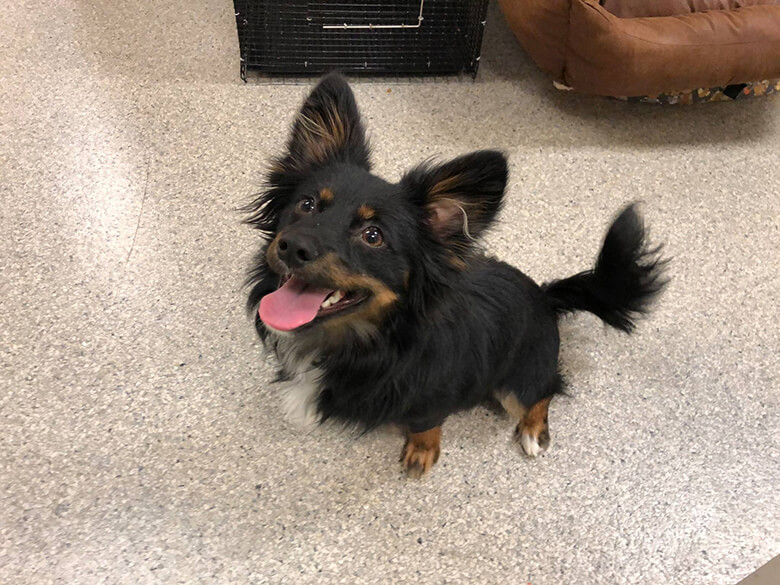 The next lucky K9 for a Day dog is Nikko, a fluffy 7-month-old Papillon, patrolling with Officer Brown today. Stay tuned to the La Vista, Nebraska and La Vista Police Department  social media for details.