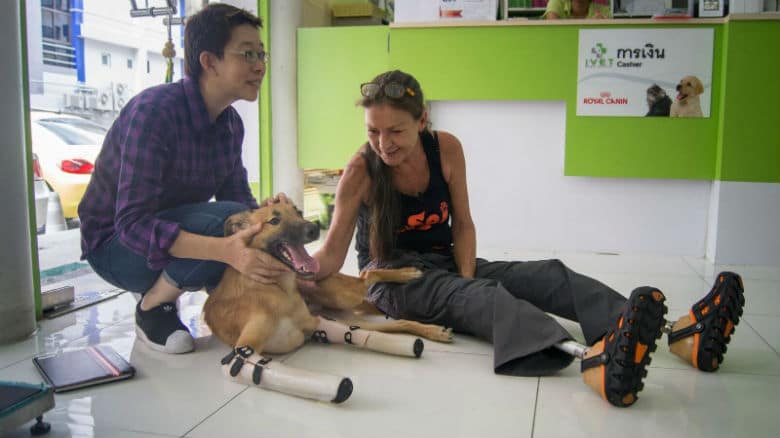 After having his legs cut off by a sword, a Thailand dog was able to walk again thanks to a very special woman.

Named Cola, the puppy was chased by his owner’s neighbor after chewing his shoes. The owner apologized for her dog’s antics and offered to pay for the damaged item. Instead of accepting the money, the neighbor took a large sword to Cola and hacked off his front legs. 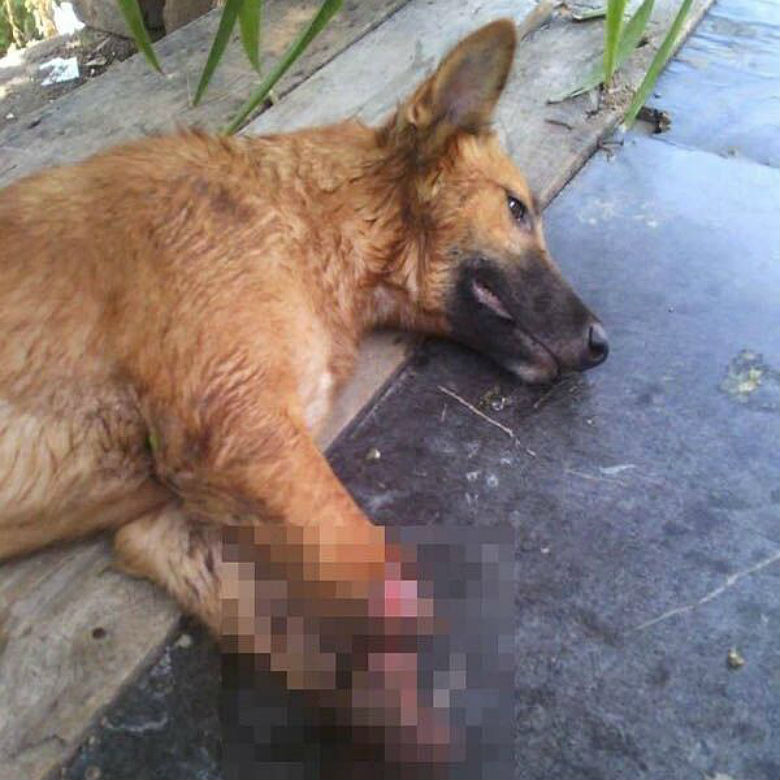 Immediately after the assault. Image via Soi Dog Foundation.

The owner rushed Cola to the vet, but didn’t think her 9-month-old puppy was going to make it. One of Cola legs was completely severed, while the other was hanging on by a thread. He also lost a lot of blood and had an infection.

The clinic was not equipped to provide the care Cola would need to get better. Soi Dog Foundation, a Thailand nonprofit to help homeless and abused animals, stepped up and not only offered to take Cola under its wings but pay for all of his vet bills. The organization took the puppy to a specialist in Bangkok, where he spent months in recovery. 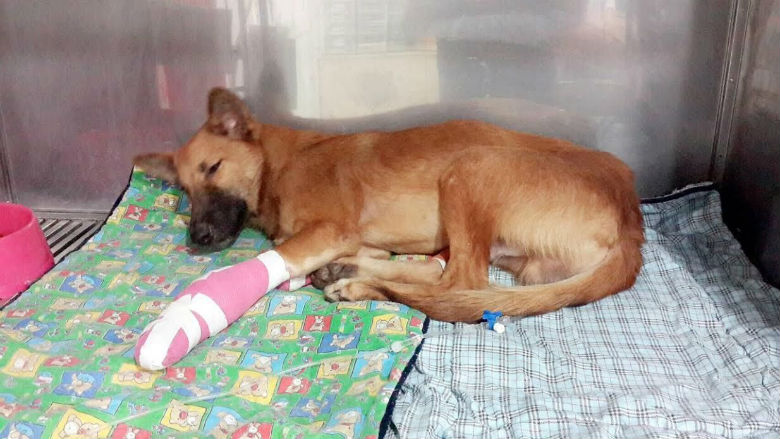 During this time, Cola’s owner decided not to take him back. The person that harmed Cola went to jail for just one month under the Animal Cruelty Law introduced in 2014 (Before that there were no laws.) Because the person was now out, she feared he would again retaliate against the dog.

While recovering, Cola was given a wheelchair but there with limitations with mobility. So, the team created specially-engineered prosthetics for him “He had to wait a couple of months in order for his stumps to heal sufficiently to be fitted with prosthetics but took to them like a duck to water,” Maeve Henry, the communication and content manager, told This Dog’s Life. 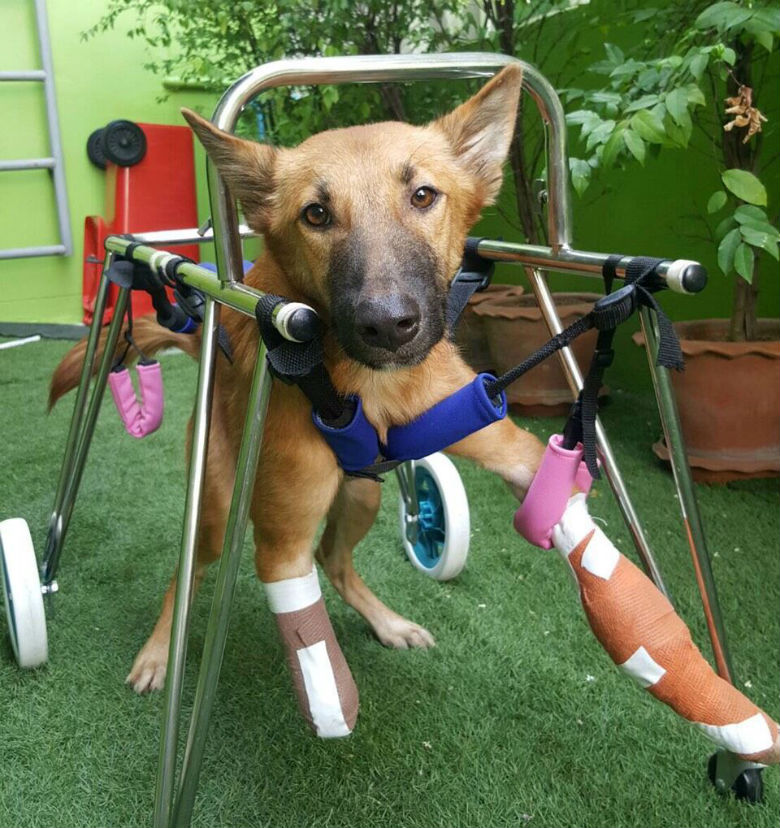 The day Cola was fitted for his prosthetic was the day Gill Dalley entered the picture. The co-founder of Soi Dog has given her all to the organization – so much so, she risked her life for her cause — and was ready to help out this pup.

In 2004, Dalley was rounding up street dogs to get spayed and neutered at the clinic (the best approach to helping homeless animals), when one became so frightened, Dalley had to use a tranquiler on the animal. The dog immediately ran into a flooded buffalo field and the drug started to take effect. The stray was slipping under the water. Dalley knew if she didn’t save him, the dog would drown. Wading into the field, she was able to rescue the now unconscious dog and bring him to safety.

Later on, Dalley began to feel very ill and her legs ached. She was rushed to the hospital and it was discovered that while she was retrieving the dog, she became infected with septicemia, a blood poisoning condition. The only way to save her life was to amputate her legs below the knee.

So, when Dalley met Cola there was an instant bond, which helped the puppy to heal. 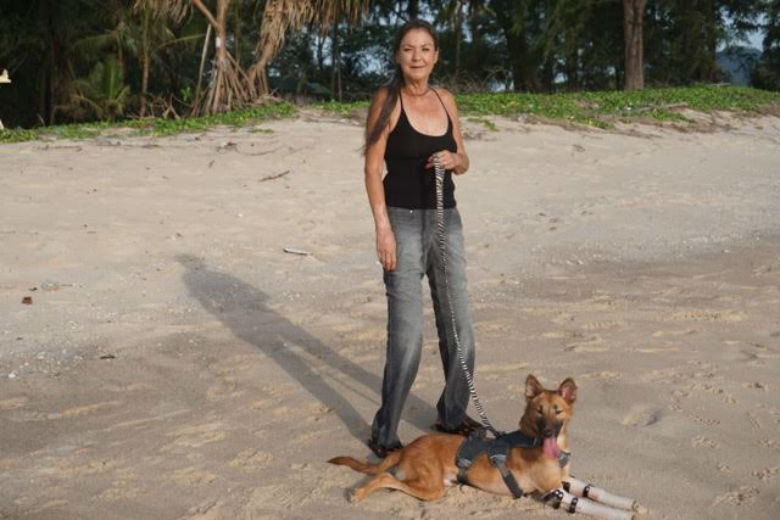 Gill Dalley and Cola at the beach. Image via Soi Dog Foundation.

“As an amputee herself, Gill had an immediate empathy with Cola,” says Henry. “They bonded on first sight and with her knowledge of prosthetics as she wears them herself, Gill is an expert at fitting Cola’s, helping him walk in them, and caring for them.”

The pair, along with Dalley’s husband John (the other co-founder) continue to make strides, both in the recovery process and in animal welfare. Soi Dog Foundation has spayed and neutered more than 117,000 dogs and cats in the area and continues its efforts to crack down on animal abuse, while Cola is working at his own milestones. 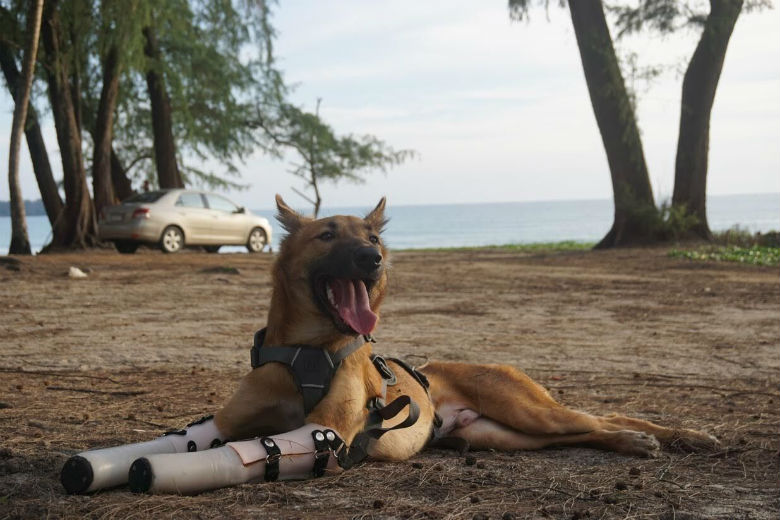 “Our hope for Cola is that he will retain no memory of the vicious attack he sustained but instead that he can bask forever more in love and kindness from Gill and husband John,” Henry says.