Thanks to advancements in 3-D technology, a disabled husky mix is able to walk more naturally.

Named Derby, the 2-year-old pup, was born with shorter forearms and no front paws. He got around by scooting on his nubs, which wasn’t an issue on softer surfaces but harder ones, like concrete, were painful. His circumstances changed in December 2014, when his foster at the time, Tara Anderson, got him fitted with 3-D printed prosthetics.

The crew decided to make the initial prosthetics closer to the ground, allowing Derby time to get used to them and not hurt himself. The legs were printed in a few short hours and changed Derby’s life.

But after about a year adjusting to walking on his new set of legs, Derby recently got an upgrade.

His new set of paws not only make him taller but help absorb impact, similar to how human knees work.

“Derby took to his new prosthetics very well,” owner Sherry Portanova says in a video. “No difference in having them on than the old ones except it raised him up to his proper height. He is walking in a straight line, and he is sitting like a real dog sits that he has never been able to do.” 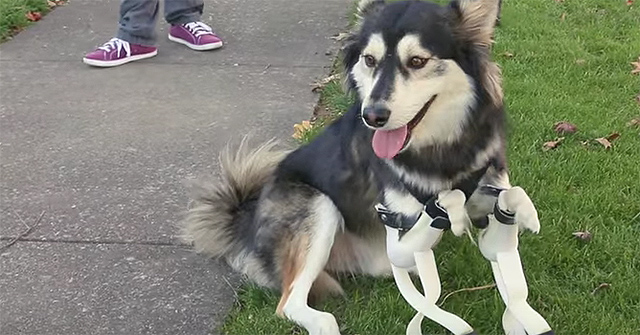