Tom and Cori Sullivan were adopted by Tink, a silver Labrador who happened to be the runt of the litter. When they visited a breeder in Michigan in September 2016, they weren’t planning on bring home a dog. But the little dog had other plans.

“She was the only dog who wanted to be around us when we were outside in the hot sun looking at the litter,” Tom Sullivan tells This Dog’s Life. “She really chose us.”

Related: ‘Kangaroo Dog’ Is an Ambassador to Pups Born With Defects 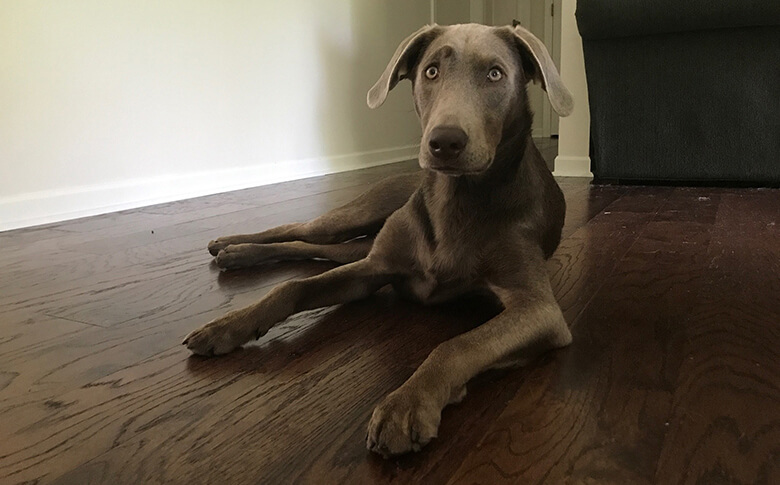 Everything was normal until the dog was nine weeks old. Then the couple suddenly noticed that one side of Tink’s belly was flat, but the other side was distended. They took Tink to an emergency vet. The news was not good.

Tink was diagnosed with a condition called Congenital Idiopathic MegaEsophagus. What that means is that the muscles that move food down the esophagus into the stomach by a motion called peristalsis do not work. When that happens, the body rejects the food by vomiting. Tink was getting little nutrition.

“During regurgitation, there is the chance that she could breathe in some of the food and develop an infection in the lungs known as aspiration pneumonia,” Sullivan explains. “Dogs do not do well with recovering from pneumonia.”

Many dogs diagnosed with this condition end up facing euthanization. Treatment is expensive and time-consuming, and there is no cure. The Sullivan’s were determined to save Tink’s life.

The solution lies in a special high chair called a baily chair. It keeps Tink in an upright position, so when she eats, gravity moves the food down into her stomach. She also takes motility drugs twice a day, notes Sullivan. “The biggest thing that we’ve done to help Tink be as normal as possible has been consistency.” 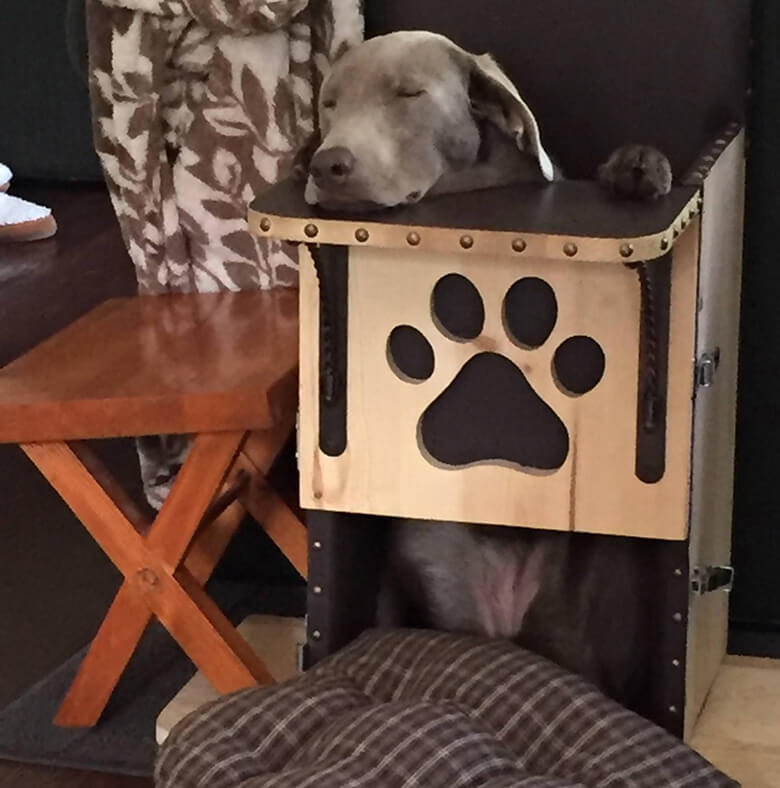 They use a set regimen for Tink’s feedings that includes food consistency and the timing of feedings. She eats four small meals a day, which is followed by 20 minutes of time spent upright in her chair. “At 50 pounds, it would be quite a challenge to hold her upright as we did when she was only 10 weeks old.”

Her food is a mixture of ground dry food, a calorie supplement and water, with coconut oil added to increase calories. She is spoon fed the mixture, which looks like oatmeal, to slow the pace of food entering her esophagus. The process lasts from 8 to 10 minutes. “Then we will burp her and massage her throat to help eliminate air bubbles and move food down,” says Sullivan. “After that, she’s a normal dog again until her next feeding.”

Related: Dog Named Cupid Captures Our Heart As He Learns to Walk With His ‘Training Skis’

Though MegaEsophagus alone will not typically impact the lifespan of a dog, Aspiration Pneumonia can be fatal. The Sullivans must stay on top of things. “It is a ton of work, but our bond with her is worth every second spent dedicated to her,” says Sullivan. “There are amazing support groups on Facebook and elsewhere on the internet.”

All this takes a lot of time, and it’s expensive. “We never got pet insurance, because it usually doesn’t cover pre-existing conditions,” notes Sullivan. They spent over $3,000 in early vet visits including her emergency vet, a visit to Michigan State’s vet clinic to meet with a specialist and have some tests done to rule out other contributing diseases, and a very expensive spay surgery done at Michigan State. “It requires serious care to put a ME dog under anesthesia, so that was a big hit financially.”

They were able to cover most of the early expenses through a GoFundMe campaign that family, friends and complete strangers contributed to. “Our expenses now are still higher than the average healthy dog, but manageable.”

Though there are successes, there are inherent difficulties in owning a dog with ME. But it’s worth it, Tom says. “She’s a loving and awesome companion, and we wouldn’t trade her for the world!”