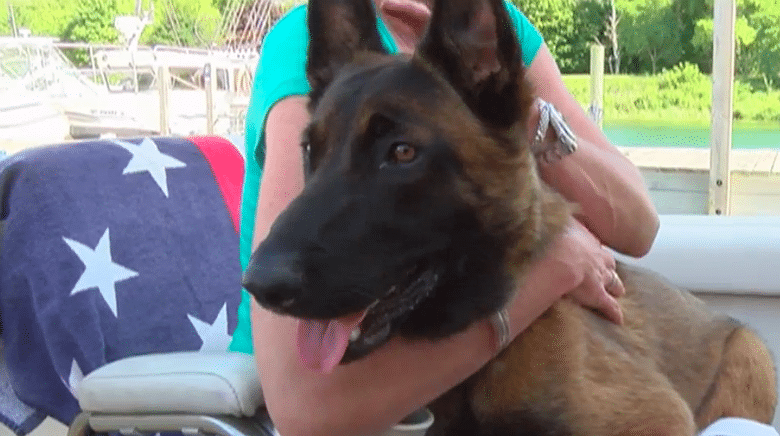 A dog that fell overboard was miraculously reunited with his family after swimming six miles and walking another 12.

Edward and Kristin Casas were out in the middle of Lake Michigan on a recent Sunday morning with their son’s 10-month-old Belgian Malinois puppy Rylee when the boat they were on had a mechanical issue. Edward went down to the engine room to see what the problem was, while Kristin steered the point. It was only 10 minutes. Ten minutes too long. During this time, Rylee somehow fell overboard.

“Our hearts just sank,” Edward told ABC. “We were gone for maybe 10 minutes, and then we couldn’t find her anywhere on the boat and she was nowhere to be seen in the water.”

Edward immediately sent out a “mayday dog overboard” on the radio.

A fisherman who responded told the couple to get in touch with his wife, Lynn Fiedor, who runs a local volunteer group called Lost Dog Search Team, according to the outlet. When Edward touched base with Fiedor and told her that Rylee was a Belgian Malinois, a breed known for its athleticism and intelligence, the woman was confident that Rylee would find his way to land. And she did.

While people were searching for the puppy, Rylee had swam more the six miles to shore. She then spotted boats in a distance and jumped back in the water, swimming towards them, hoping to reunite with her family.

Fisherman Brad Price spotted her about a half mile off shore and was able to coax Rylee to his boat. After getting her on the boat, the dog tried to jump out twice, according to Price. Once back on land, Rylee escaped.

After the word was out about the missing dog, it became a waiting game. Though no sightings were reported that Sunday evening, there was one the following morning. A woman had seen a dog that fit Rylee’s description at a local campground.

“It was amazing,” Fiedor told ABC. “She literally swam over six miles and walked over 12 miles more through the woods.”

Now the issue became how to catch Rylee. A local suggested that the couple park their vehicle in the campground, put their scent near it and having food and the dog’s toys out.

Soon after Edward started one of Rylee’s toys, the dog emerged from the woods and happily greeted them.

“Let me tell you, I’m not the kind of guy that cries but oh did this make me cry,” he said. “I am so proud of this dog and so proud of and grateful for Lynn [Fiedor].”