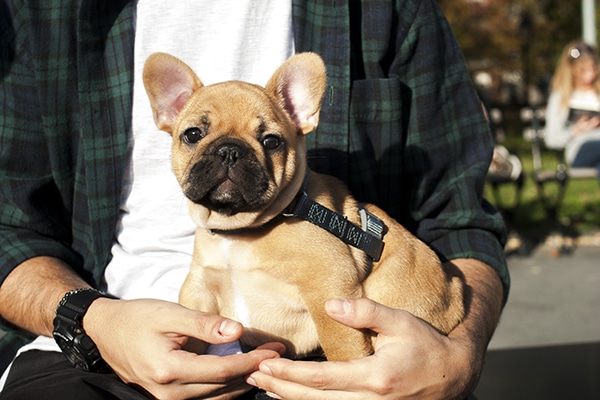 When it came to naming his 8-week-old French bulldog, owner Daniel had a go big or go home mentality.

“His name is Theodore James Franco Gatsby,” says Daniel. The name is a combination of James Franco (obviously), J Gatsby (the main character, Jay Gatsby, in F. Scott Fitzgerald’s famous Great Gatsby novel) and Theodore (a name that came with the pup).  The name (and the adorable dog) is a hit with everyone.

He’s so calm, loving, cute and apparently a major chick magnet, Daniel says. “I’m surprised how many girls stop to say hi to him.”

Even so, he isn’t perfect. His owner just wished he would “pee and poop on the wee wee pad or outside,” But even so, Daniel isn’t giving up Theo anytime soon.

Photo by our Monique Toro