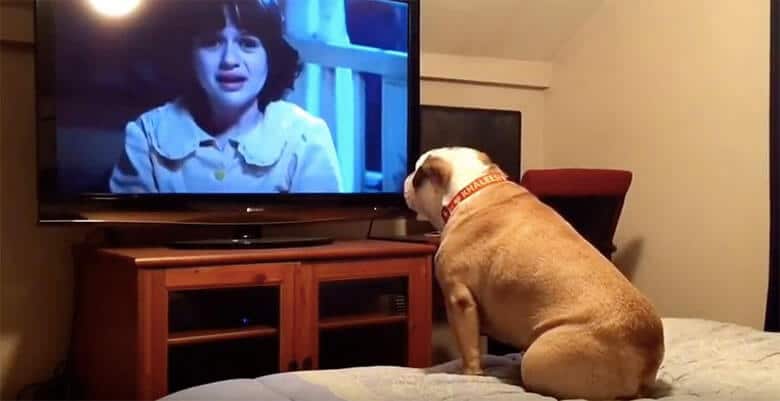 Horror movies are made to scare you. The characters do everything wrong, the house has all sorts of issues (bad circuits, telephones that don’t work) and a villain who is basically indestructible. It’s an equation for disaster. Yet one dog has made it her mission to warn those in the movie of danger — even if is from the bed of her home.

In a video, you can see Khaleesi, an English bulldog, intently watching the movie The Conjuring about a spirit terrorizing a family in a secluded farmhouse.

In a scene, a girl cautiously peeks her head under the bed. Khaleesi tries her hardest to alert the character that something bad is going to happen. Barking at the screen, the bulldog is hoping the girl will heed her warning — but obviously to no avail.

Related: Woman Swears She Sees Her Dog’s Ghost in Video

When the girl screams, Khaleesi practically falls off the bed trying to jump and save the child.

The dog’s act of heroism isn’t just for The Conjuring.

“Khaleesi loves watching horror movies and always tries to protect any potential victims from harm,” the presumed owner writes in the video description. “She is especially vocal when children are in danger as seen in this clip.”

The video has been viewed more than 1 million times since it was uploaded on June 5, with people impressed by the dog’s willingness to help.

Related: Could a Ghost Be to Blame for ‘Suicide Dog Bridge?’

“This dog might as well be a human in a dog costume. He knew what was happening in the movie. Unreal! There’s so much we don’t know yet about animals. Just amazing.” MB

“Wow, that is extremely incredible! I cannot believe that a dog could do something like that. He/she is very talented and should be nominated as world’s most talented dog! Congratulations! ” Drew Kent

Check out Khaleesi in action below: