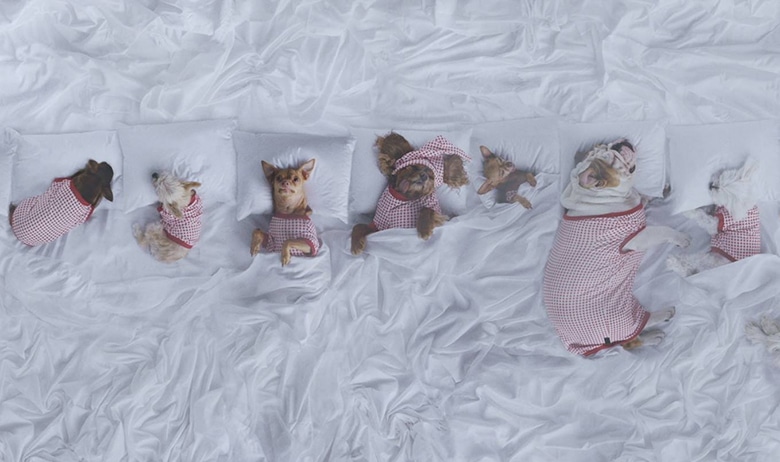 The opening is similar to Yeezy’s video, with a shot of the sun from what looks like an airplane, followed by TK rapid shots, but instead of naked people lying on the biggest bed ever, there are 10 famous dogs sporting matching pajamas.

The video was shot for charity ‘(RED)’, an organization co-founded by U2 singer Bono with a mission to fight AIDS.

“I grew up during the ’80s and always felt like AIDS was the crisis of my generation” Dorie Herman, dog parent of Chloe Kardoggian, tells This Dog’s Life.  “I have walked in almost every AIDS Walk since 1995, raising a few thousand dollars. This was a way to get to bring my passion for this cause together with the work Chloe does so saying yes was a no brainer.”

Instead of the wax figures portrayed to look like famous celebrities — including Taylor Swift, Anna Wintour and Donald Trump – sleeping, the parody has the dogs playing in the dark and then taking a snooze.

“I don’t want to give away any secrets to how they got all the doggies to lay in one bed quietly at the same time,” Dorie Herman, owner of Chloe Kardoggian, tells This Dog’s Life. “We did some shooting in a more enclosed space for the parts where the dogs are moving, and that was all done hand-held with the camera. Then the dogs did the more stationary bed taping with a fixed camera. ”

The red-and-white pajamas the pups sport are part of the ‘(RED)’ Shopathon campaign. They cost $28, come in sizes XS through XXL, and proceeds from the purchase will help raise funds for the charity.