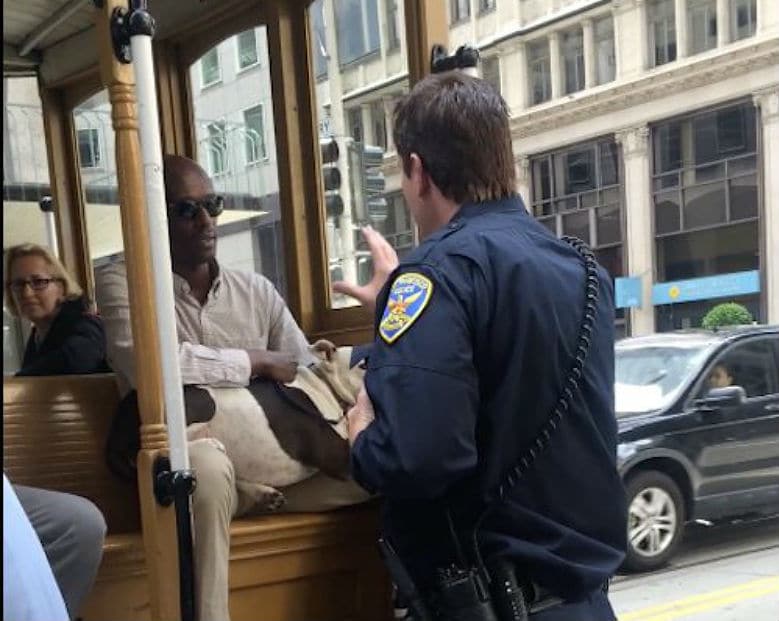 Tad Tadesse is used to be asked to get off San Francisco’s public transportation system, known as Muni, because of his dog. So much so, he claims he has been told to vacate Muni 20 times. But after a recording of a recent incident in which a Muni supervisor and San Francisco police officer purportedly try to remove Tadesse from a cable car went viral, he is hoping things will change.

On Saturday, a video of Tadesse and his pit bull Rosie was uploaded to Gina Tomaselli’s Facebook account. In it a police officer is asking Tadesse to get off the cable car, with Tadesse refusing, stating, “I won’t get off the bus, because I have every right to ride this.” To date, it has been shared more than 11,000 times, with 4,000 comments.

Apparently, law enforcement was called after the operator of the cable car reportedly refused to operate the vehicle with Rosie on board, as he was fearful of the dog. The officer eventually convinced Tadesse to get off the cable car. But this sort of incident should have never happened.

Rosie is an emotional support dog, meaning Tadesse and her are protected under the law. Yet, Joanna Fraguli, deputy director for programmatic access at the Mayor’s Office on Disability, told the San Francisco Examiner that the Americans with Disabilities Act defines service dogs as those trained to provide a service, such as a guide dog, and emotional support dogs aren’t included.

However, the Federal Rehabilitation Act does include emotional support dogs under the service dogs definition and because San Francisco Municipal Transportation Agency gets federal funding, it must oblige by the broader scope set by the federal government.

A Muni representative told the Examiner that Tadesse was never denied service – but the video and Tadesse state otherwise.

According to Tadesse he has email correspondence with local government agencies complaining how both the SFMTA and SFPD have treated him and his service dog.

“I‘m kind of relieved that finally I might get help,” Tadesse told the Examiner, “especially on the lawyer front.” He is considering suing.

As for the agencies, they are further looking into the matter.