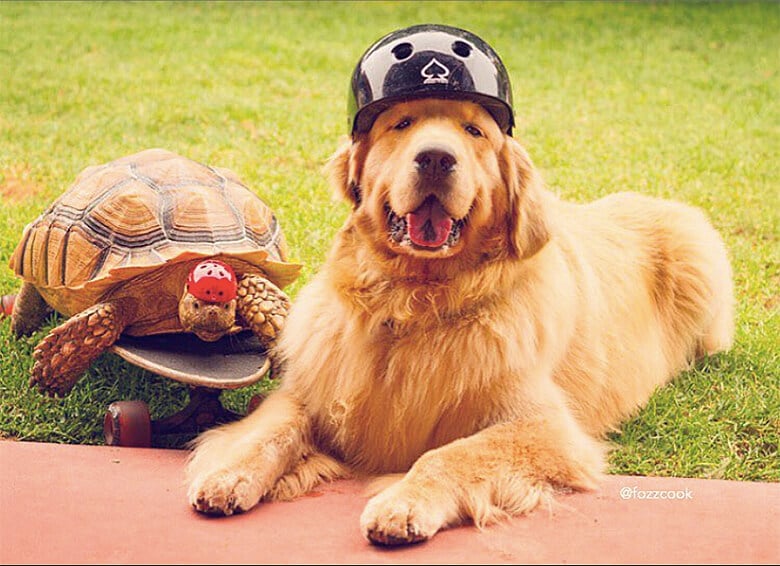 It all started when Christine Hill took her kids to an educational animal center in Santa Barbara, California. At the tortoise exhibit, they watched an African spurred tortoise named Larry being attacked by the other larger male tortoises in his enclosure.

And they decided it just wasn’t okay. They didn’t agree with the keepers’ solution to let nature take its course. The right thing to do, according to Hill, was to let her take the bullied tortoise to her home in Southern California, where she shelters a rotating roster of rescue animals.

“We have horses, chickens, guinea pigs, dogs, cats, lobsters, eels, tortoise and fish,” Hill tells This Dog’s Life. “In addition, we regularly have rescue animals that we try and find homes for or rehabilitate and relocate, including possums, raccoons and other furry friends.”

The center agreed to surrender the tortoise, and he went home with Hill and her children. But at first, Larry was not happy. He was still on high alert, and he kept running — as fast as an African spurred tortoise, which can weigh as much as 160 pounds, can run — to the fence, trying to escape. 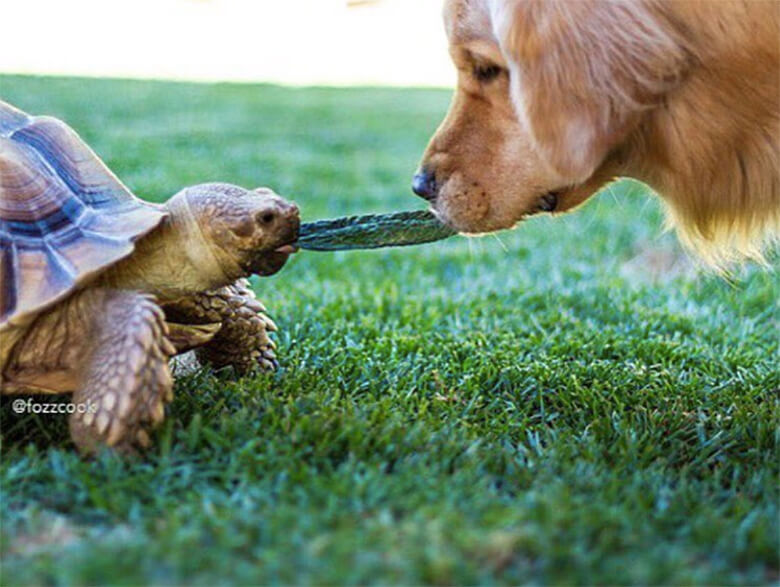 When Hill was finally able to coax Larry inside, his life changed forever. He met her golden retriever named Cricket, and they both fell in love.

“When Cricket saw Larry in such distress, he came straight over to comfort him,” Hill says. “He instinctively knew Larry was feeling scared.” 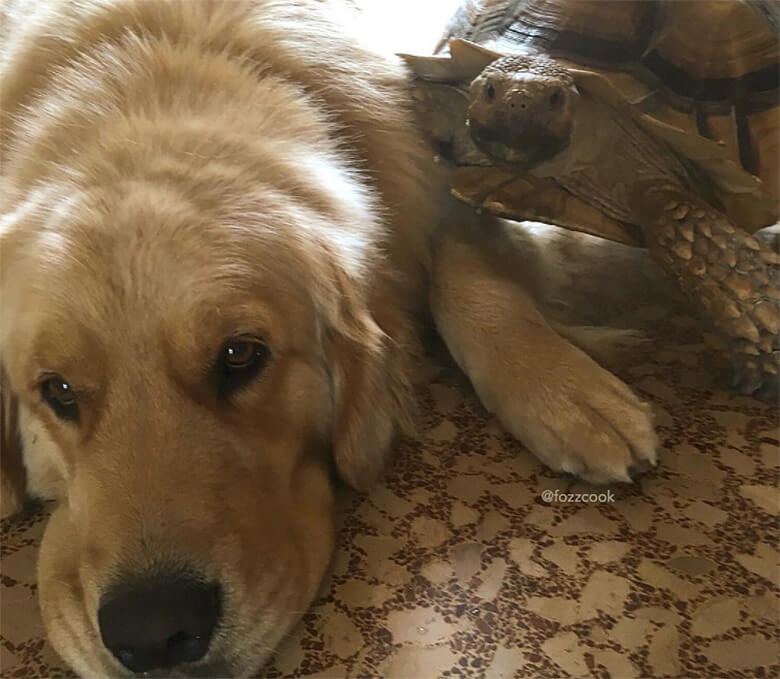 The dog plopped down next to the tortoise, and Larry relaxed, maybe for the first time in his life. “Larry is definitely much more settled now, and confident, and he doesn’t get alarmed if he’s not with Cricket all the time.”

The tortoise and the dog do everything together. They eat together and sometimes share lettuce leaves and watermelon. They take walks together. They sleep side by side. When Larry went into hibernation, he decided to burrow under Cricket’s bed. 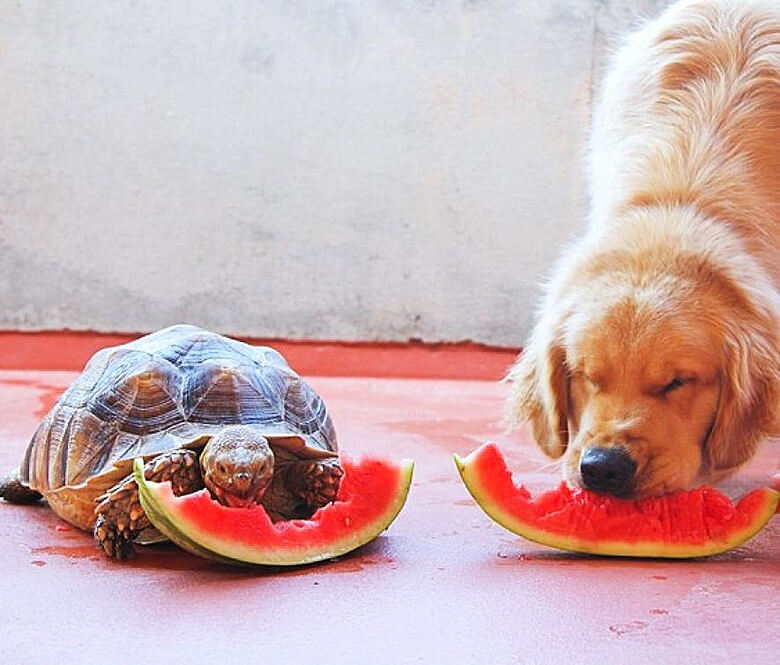 When Larry’s not hibernating, he’s large and in charge. “The other animals respect Larry; I think he may rule the roost in the house,” says Hill. He’s even been known to herd the chickens out of the kitchen when the dogs are too lazy to do it.

African spurred tortoises are native to the southern border of the Sahara Desert, so Larry is thriving in the hot, dry climate of Southern California. He’s also a very happy tortoise. 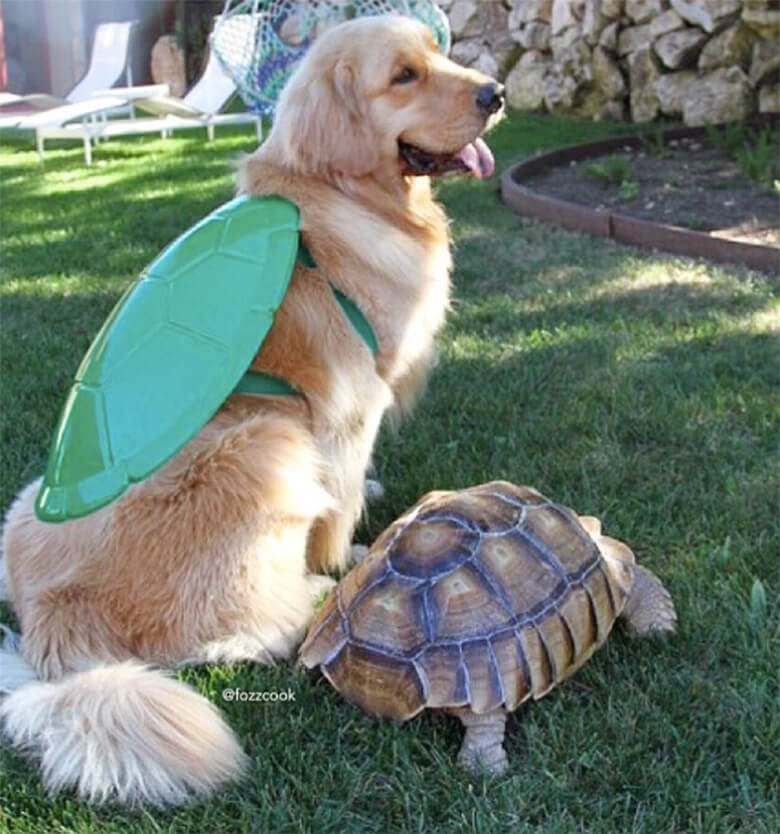 “Larry loves his home!” says Hill. “He has never even bothered to walk to the boundary of our property like he did in the beginning.”

Here’s a cute video of them hanging out together.