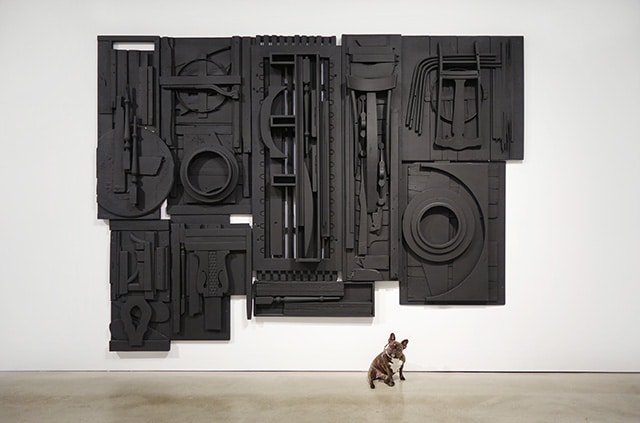 Go to any New York City art gallery and people may encounter celebrities schmoozing, socialites weaving through the crowd, creative aficionados talking to other aficionados — and if they’re lucky, Miss Pickle working the room. No, she isn’t the latest muse or new-age designer looking for her big break. Miss Pickle is a French bulldog, and she is making a name for herself in the world of art.

Normally, an art gallery would be the last place you’d expect to find a four-legged furry friend but this 4-year-old pup is something of a connoisseur. She has strutted her stuff in more than 100 galleries, brushed shoulders with several influential artists including Korakrit Arunanondchai, Lucas Blalock, Trudy Benson, Mark Dion, N. Dash, James Hyde, Roxy Payne, and Hank Willis-Thomas. Her presence has also been requested at art galleries such as Sean Kelly while hot spots like Paul Kasmin, Mary Boone and David Zwirner have welcomed her. 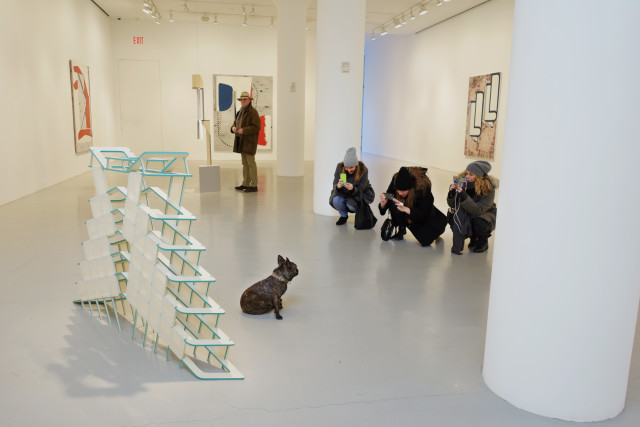 For the last two years, Pickle’s art adventures have been documented on Instagram by her owner, art adviser Katie Howard. Under her social-media profile, Pickle Beholding, the brindle Frenchie has snagged more than 5,600 fans (and counting!) and her numerous poses have been featured in The Daily Beast, Refinery29 and The Huffington Post, to name just a few. 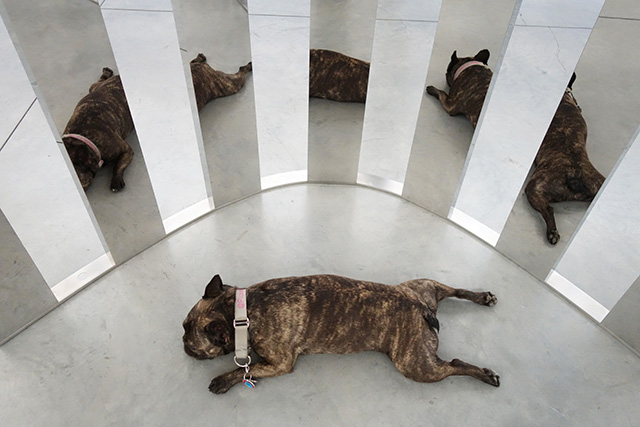 All We Need Is Inside at 303 Gallery. Photo Credit Katie Howard

She began her career as an expert gallery-goer at an opening entitled Digital Expressionism at the Suzanne Geiss Company. There, she made friends with another art world oddity: a baby posing on the Korakrit Arunanondchai’s runway-esque piece. “Everyone started taking pictures, but it was more about the adorable interaction than the art,” says Howard. 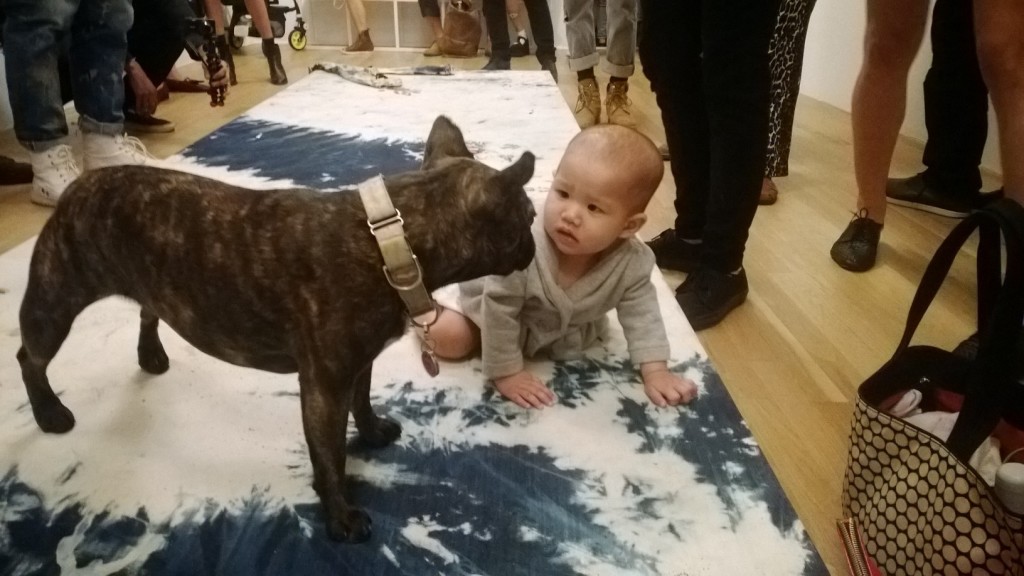 It wasn’t until another opening at the Nicole Klagsburn gallery a few months later that Pickle Beholding really started to take shape. “It was really crowded, so Pickle plopped herself down to avoid foot traffic,” Howard says. She happened to be sitting – almost perfectly posed – beneath one of the works, and Howard snapped a picture. While that was when the idea for Pickle Beholding solidified, this little Frenchie was always cut out for the art world. 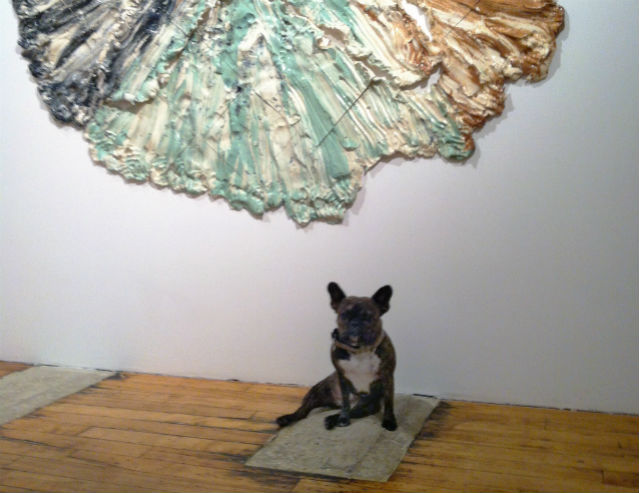 As Howard recalls, “She was the puppy in the litter watching all the other dogs being wild,” Howard says. This calm temperament helped Miss Pickle adapt quickly to her owners’ living quarters, where Howard lives with her fiancé, artist Nat Ward.

Early on she learned how to behave around fragile items. “We have a lot of art and delicate things in our apartment, so she learned very quickly what was hers and what she had to be careful around.” 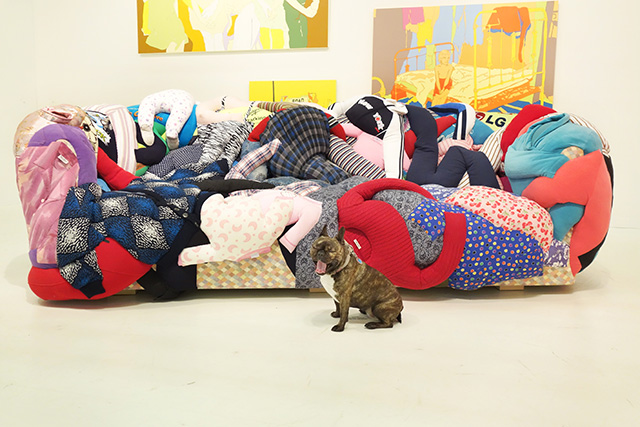 There are some occasions, though, where even a dog as special as Pickle needs to be kept on leash. Howard says that Pickle tends to gravitate toward pieces of art that resemble her toys. “I’d have to keep on leash if we were ever to go to a Mike Kelley show!” she says, noting Kelley’s exhibit at MoMA PS1 which features multicolored plush toys suspended temptingly from the ceiling. Other than that, Pickle enjoys sculptures, or pieces that are set low on the ground that she can walk up to and sniff. Once she picks a piece, she’ll very obligingly sit and pose, “back up a little” or “move over please” as directed by Howard. 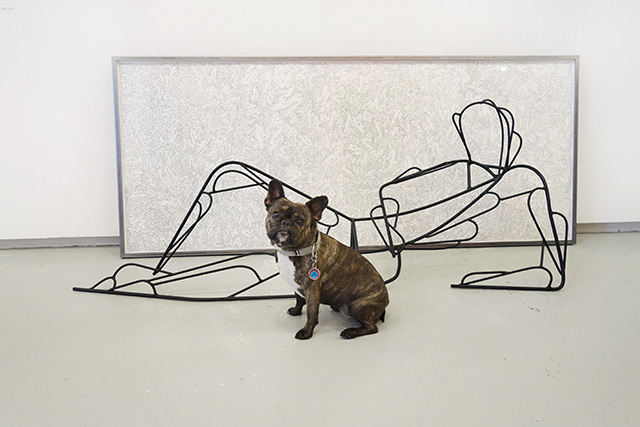 Plan B Gallery at The Independent. Image Credit Katie Howard

So what do artists and gallery owners think of their furry fan? Howard admits that initially she was worried that some might think she was being disrespectful by having Pickle pose with art. And while a very small minority might consider Pickle’s appearance in a gallery unorthodox, her overall reception has been positive. Seeing a dog at a gallery does something to alleviate the “scary” boundary that is sometimes felt in viewing art – the pressure, perhaps, to approach viewing with a critical and studied eye or not at all. Pickle’s presence helps make the art world less intimidating. After all, as Howard says, “Who doesn’t love a cute dog?”

Head over to SnapChat to get more Miss Pickle (PickleBeholding) or Art Blog Dog Blog for more images from each show, studio visits and interviews with artists.