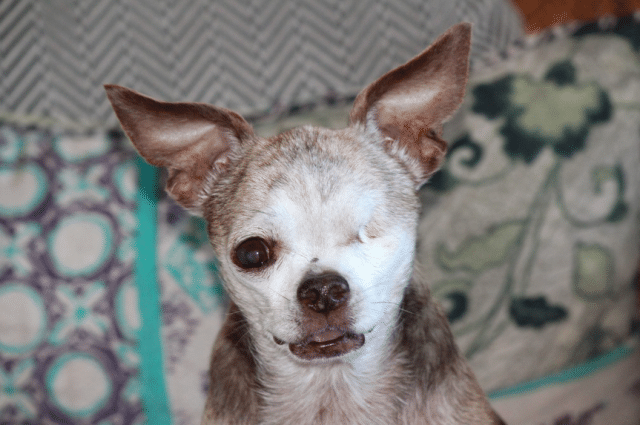 There wasn’t a dry eye at the Beverly Hills Hilton this past Saturday, as a Chihuahua named Harley was brought to the stage and honored with the American Humane Association’s  “Emerging Hero Dog” dog award.

The 14-year-old dog is a puppy mill survivor who has gone on to be one of the faces of the awful practice of commercial breeding. Harley spent the first 10 years of his life crammed into a small cage at a puppy mill before being rescued by National Mill Dog Rescue and adopted by Rudy and Dan Taylor of Berthoud, Colorado. During his time in this tiny cage he, like so many other dogs, was severely neglected for the sake of money. Harley has a diseased heart, a broken tail, deformed legs, a mouth of rotted teeth and of course, his most noticeable ailment: a missing eye. The dog most likely lost his eye when his cage was power washed with him inside of it, a common practice at puppy mills.

When rescued, the Taylors were told the 6-pound dog only had two to three months to live. But he kept thriving and wanted to show the world that his time on this planet wasn’t over yet. Rudy created a Facebook page for Harley to help spread the word about puppy mills. There is also the “Harley to the Rescue” campaign, which has raised money to help National Mill Dog Rescue save and rehabilitate more than 500 dogs.

Besides taking to social media, the dog accompanies rescuers to puppy mills where he  is “keenly aware of what is happening. There is something indescribable in the way he communicates with the sad and scared dogs,”says the American Humane Association. Harley also educates people about the puppy mill industry by attending events and visiting schools.

“Harley survived in hell for 10 years and there’s only one thing that allows the spirit to do that, and that’s to be indomitable,” Dan Taylor said on stage “That spirit is allowing him now to be the voice for dogs who cannot speak for themselves… and give everybody hope that tomorrow’s going to be a better day.”

The award, given to “ordinary dogs that do extraordinary things,” was just one of eight handed out during the sold-out event. The other categories were arson, guide/hearing, law enforcement, military, service, therapy and search and rescue.

Hosted by actor James Denton and model and animal advocate Beth Stern, the event will air on the Hallmark Channel on Oct. 30.

Related: ASPCA’s Latest Raid Shines a Light On the Life of a Puppy Mill Dog